The Great Snowstorm of 2018

After much hype and ado, the great snowstorm of 2018 hit the northern Arkansas Ozarks with a whimper. We woke to a heavy dusting of unmeasurable snow and damp walkways. The weather person was right – we did get snow. Our day also brought cinnamon rolls and the artificial tree scattered across the living room floor ready to assemble.

Frozen snow laden days always take me to the kitchen to cook a “big breakfast” – biscuits and gravy, bacon or sausage, eggs and fried potatoes. Sometimes fresh salsa for the scramble or an onion and pepper saute. The obligatory orange juice and coffee goes without saying. All that was in the plan. In anticipation of being snowbound for several days, we made three runs to the grocery making certain the kitchen and bathroom were well stocked. You know the mantra; bread, milk, toilet paper. In our case it also includes chocolate, bubbly, and maybe a good cheese/cracker combo.

Cinnamon rolls with a light vanilla icing and chopped pecans

At the last minute (last night) Gene wondered if we could instead have cinnamon rolls as a special occasion snowstorm morning meal. Sure, why not. As an aside, until now Gene has never once in our five plus years (I know that really isn’t very long in the whole scheme of things, but you know it’s our timeline here) made a special food request. Always expressing satisfaction at what I put on the table and refusing to suggest anything additional, I am sometimes suspect. But that is another story.

So we slept in, having noted in the wee hours of the morning that the storm had brought less than one tenth of an inch and likely not much else on the way. We arose quite late and I made cinnamon rolls from scratch, leaving them to rise while Gene made our coffee (which I so adore) then we sipped and speculated – mostly about the weather.

I would like to make note of the weather forecast and the forecasters… our weather site of choice has a fifteen day forecast. You may know all of this and if so feel free to skip ahead some distance. Fifteen days ago (!) when today first appeared on the fifteen day forecast it said “snow”. It said a rather high percentage chance of snow and that surprised me. I thought, “How can they know with that level of certainly that it WILL snow on the 8th of December two weeks ahead? Bah. Certainly that is a ruse.”

Each day thereafter the snow forecast persisted, wavering between 60 – 100%. The closer it got to the intended day the more detailed the information became. First it was 1 – 3 inches, then more, then less. Some days included ice, rain and/or flurries (flurries, the scariest snow forecast one can get in the Ozarks. Why, I remember two storms where “flurries” were forecast – one dumped over a foot of snow and the other graciously left behind eighteen inches! But once again I digress). For a few hours the forecast stated we could possibly get 8 – 13 inches. That prompted our third trip to the grocery. Does everyone except me have powdered sugar in the pantry in December?

Now, several hours after originally writing this, it is snowing dollar size chunques of snow and sticking, so, who the heck knows. 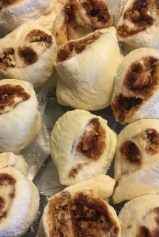 cinnamon rolls ready for the oven

I baked the cinnamon rolls from my Better Homes and Gardens cookbook circa 1974 and it certainly is a solid recipe but nothing to rave about. The recipe made 30 quite small cinnamon rolls because really, who needs giant cinnamon rolls when you can just eat three small ones. So there are approximately 22 rolls left to pack up into the freezer for other days (don’t tell me about any math discrepancies you may note here).

I am already considering the last of these cinnamon rolls joining some other bread delicacies and pumpkin or squash for a later bread pudding.

Recalling the best bread pudding I’ve ever made – on Dauphin Island many years ago with a group of lady friends sharing a house for a week. Nearing the end of the trip quite a lot of day old bread-like scraps were being considered for the trash can. Being of the ever “use it up” mentality I collected the stale donuts, a couple of crusty croissants, dinner rolls and sourdough bread scraps and along with some eggs, yogurt, half and half, random nuts and a couple of shriveling apples I made a bread pudding. It was The Best Ever. Never to be duplicated – but that happens a lot when I’m in the kitchen – random food never to be duplicated.

Today’s cinnamon rolls need more depth. They are good, light and fluffy dough with plenty of cinnamon (I did triple the amount) but this evening I will spend a few moments  scouring internet recipes to see what and how cinnamon roll decadence can be better achieved.

While Gene was later cooking sausage patties, over-broken eggs and toast I moved furniture, pulled the Christmas tree out of the box and was pleasantly surprised to find at least 45 minutes shaved off the assembly time because one of us had the foresight last year to rubber band the matching branches together instead of indiscriminately tossing them into the tree box. Cool idea! Neither of us remembers doing it but hurrah for us!

New pj’s and crocs for a walk in the snow.

After cinnamon rolls, coffee and our two PM breakfast I went to the garden to check the cloches, survey the yard and collect some of that surging snow storm on my tongue. There is nothing like the quiet of snowfall in a pine forest – an interesting form of vertical susurration. Hopefully enough snow will accumulate to bring that special sound to our ears before nightfall. Note to self: look for the 4th of July sparklers.

dusk on a snowy day

4 Responses to The Great Snowstorm of 2018