Time is flying right by us. Can you believe it is almost 2017? Just a couple of blinks and we will be working on the third decade of the 21st century. I think of the Jetsons every once in a while and wonder where our flying pods are… and that kitchen robot. Oh well.

To the garden then!

The coolest thing happening right now is this short little row of Contender bush beans I planted late in September. They have been flowering for several days. You can see below how I plan to keep them toasty. 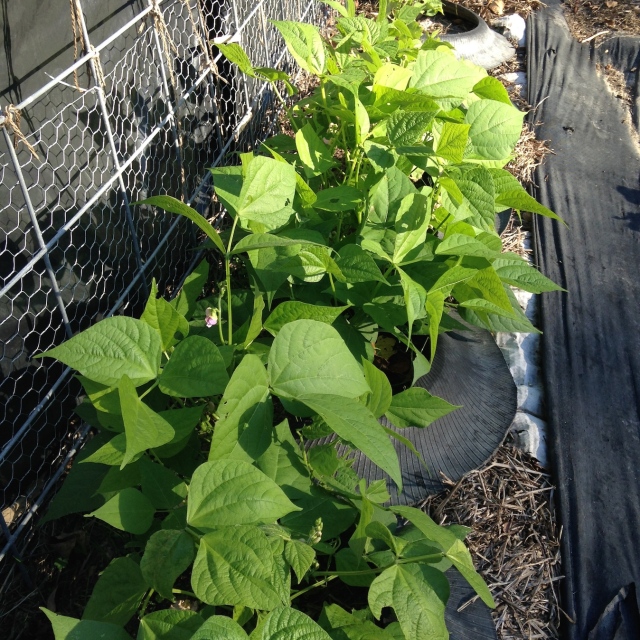 Planted on the south side of a fence line the back side has a black plastic wall and behind that is one inch styro sheets for insulation. Placed next to the mulch is tire 1/2 rounds to heat the soil and help create a microclimate, and black weed block has been laid in the walkway as close to the plants as possible. Tomorrow we will put a 4 X 8 sheet of safety glass, like a lean to, in front and close the ends. It should stay warm enough to make beans. We are not expecting frost anytime soon but there will be some pretty chilly nights. It is November!

I held back one Genovese basil for fresh sprigs if I want them. The rest were cut back some time ago. Besides it’s lovely to smell! It did get a little nipped as you can tell by the slightly browning leaves. I imagine it will bite the dust in the next couple days as anything around 40 degrees or lower will ruin it. In the rest of this area I planted some Brussels Sprouts plants we started quite a while back. Grasshoppers, a stray cutworm and a misplaced foot have taken a toll, but if three out of nine plants  make it there will be way plenty!

We will make L shaped towers about 3 feet tall to brace the Brussels Sprouts and as support for cover if need be. They will overwinter here, even a little further north. Pictures later when they are worth looking at.

I have let the entire patch of Thai basil go to flower and it is so beautiful. Every day it is aswarm with bees. I hope somewhere someone is getting some yummy honey from this. It will be gone though after the first cold night, which will be fine as I want to put in some cabbages under cloches.

This was yesterday’s picking. Just under five pounds of jalapeno peppers, a handful of red Jimmy Nardelos, a stray Marconi, enough snow peas to contribute to tomorrows stir fry, and a mess of okra. I don’t expect any more okra…seriously it is November 9 and gonna be frigid these weekend nights. I’m sure Gene will have to take the chainsaw to it as the stalks got huge.

There are eight or ten pounds of big shiny green Black Krim tomatoes on the vine and I plan on giving them until Thursday or Friday and then picking the whole mess. They will ripen if they have a nice shine to them. The vines will need to be pulled and burned because the aphids have been atrocious since last fall. I get them under control and then they come back. Recently I learned that zinnias draw aphids to them and this was the second summer I planted zinnias IN the garden. Next summer the zinnias will be far away from the garden.

Pickings one day last week. The eggplant is a bit scrawny but it is loaded now. We had enough to make baba ghanoush and it was delicious! It’s on the menu again in the next couple days. The plants have doubled in size in the last couple weeks. 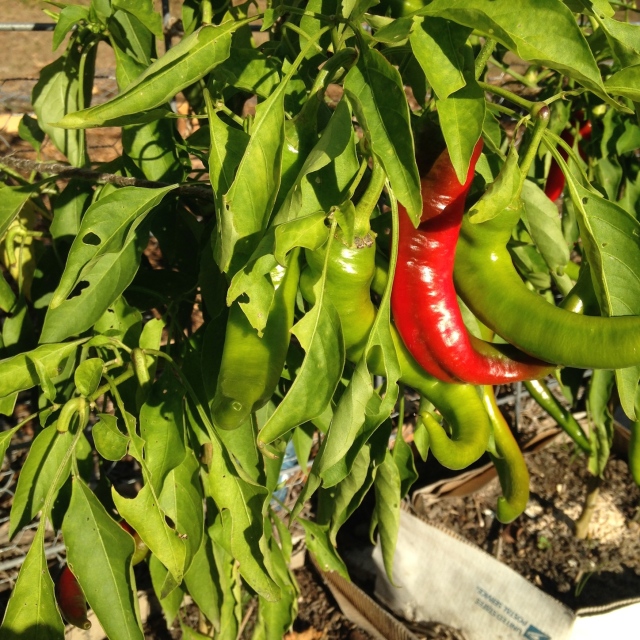 Jimmy Nardelo Italian frying peppers finally turning red. The plants are loaded and will be ready to pick soon, before it frosts. 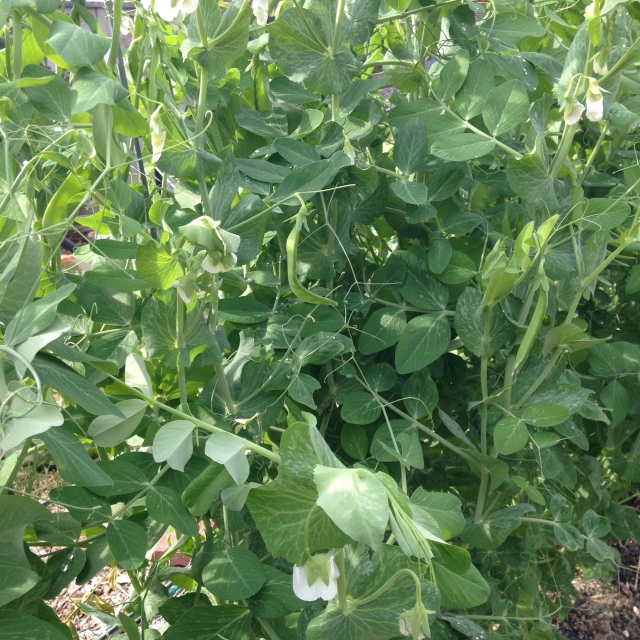 There was only room for a six foot row of snow peas but that is enough with everything else there is to eat. A great big handful every couple days makes a nice stir fry. I like them flash fried with onions and a little soy sauce. Look for the recipe here. The sixteen foot row of English peas on the other hand are not doing so well. Kind of puny and pathetic. They  are sparse and not very tall. It doesn’t seem likely there will be enough to freeze, only to eat. I really like them raw, shelled in salad. 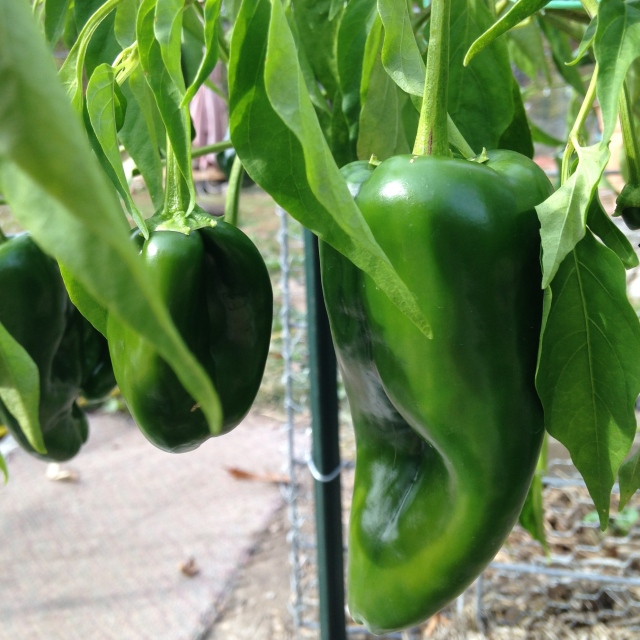 The pablanos are also heavy with peppers and they too will get plucked clean before the first frost. 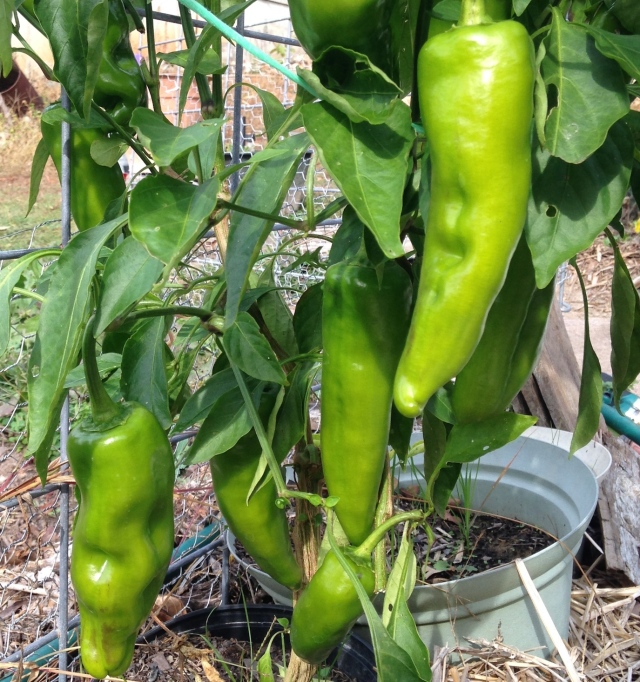 These are Red Marconi, another Italian frying pepper. They are six to ten inches long and will turn red if given enough time. I think we started with ten last spring then transplanted to a new spot when it became obvious they really hated it on the east side of the garden. Some died. Five went into pots and were nestled deep into straw mulch when it got really hot. They were very happy. Until one day – all but one just croaked. This one is now covered with beautiful peppers and we have eaten quite a few. 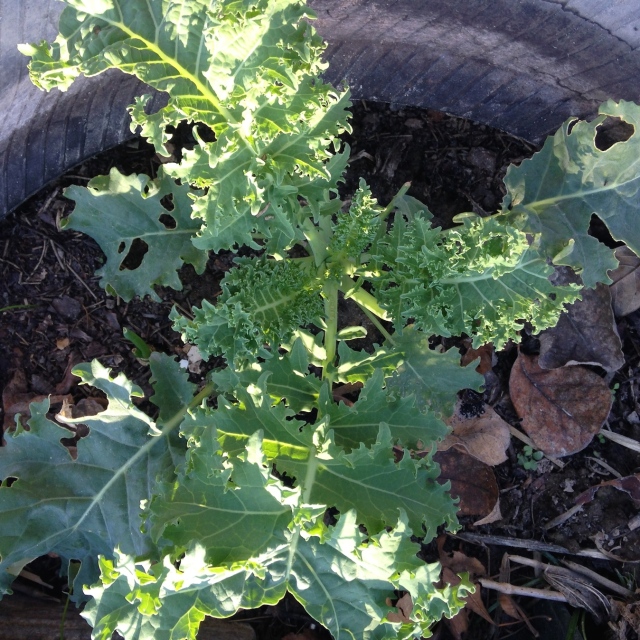 We started two kinds of kale, Dwarf Siberian and some curly thing. There are five of each and that is enough for the two of us to eat kale once or twice a week.

A lettuce patch with several varieties of leafy lettuce is enough for salads every day or so and more on the way. Radishes now that is is finally cool. Hundreds of tiny Tokyo Long green onions will be ready come spring and fronds can be picked off soon as needed. The garlic is up and deeply mulched with shredded leaves as are the shallots.

Lets talk about leeks. Remember I started about fifty from seed last fall. Autumn Giant. Fifteen made it to be planted a while back and there are eleven growing heartily. I am so tickled. The experiment of chopping purchased whole leeks into three pieces and planting in a pot was partially successful as one piece is making a very nice leek. But I don’t know which piece as all my labels were destroyed somehow. I have another pot of leeks started but they won’t be ready for the dirt for quite a while yet. AND by some good fortune I have come upon a mess (I know not how many until Gene brings them home) of starts ready to be planted out right now! So. There will be leeks this spring for sure. Thank you Pat!

Finally I have parsley. I have not been able to get any to sprout so gave in and bought plants. Maybe it will go to seed next year and self propagate. The cilantro self seeded and is doing well. Maybe too well… The mint got too hot and dry and looks dead, again, but we sure enjoyed it over the summer. Going to have to try some new plan. I have rosemary and basil starts rooting in the kitchen window. The garlic chives are self seeding new plants for spring. The lemongrass is dried and put away. Dill and fennel doing what they do. Never did get the oregano cut and dried and it is too late now. Sage. Next year. For sure.

The beets are about six inches tall. Only about half of them germinated but that is an improvement for me. And I actually got parsnips to germinate! This tickles me big time. I planted them very shallow, watered them in and set a clear plastic storage tub over the small bed to keep them moist. They sprouted in less than two weeks. There aren’t many but that’s okay. Next fall or even this spring I can recreate that and plant more. I haven’t been able to get carrots to the table yet. One problem after another – but I’m not giving up.

Still to plant: pak choy, the cabbage starts and some seed, maybe more snow peas, leeks. That should do it.

In case you wonder, we are in the northern area of zone seven. The small kitchen garden has about 200 square feet of growing space and is on the south side of the house butting up against the concrete patio. It stays pretty warm in all but the coldest weather.  What we call the cornfield garden is about 300 square feet of growing space, is new this year and out in the open. But we plan on putting a lot of effort into protecting plants from the wind and northern falling cold.

This year we amended all growing areas with biochar, Azomite, worm castings, organic fish meal, blood meal (leafy things only), bone meal, three cubic yards of compost that our compost king, King Gene created this summer, and lots of back breaking TLC. We just put in a strawberry bed, thank you very much for the starts Marideth! And we have two tractor tires to position and start filling in. I think they will be winter beds for leafy greens. Maybe. Hopefully the Hugelkultur will be ready to plant this spring. And I imagine the big new flower bed will self seed with the sixty zillion seeds it dropped this fall! One less task for me.

How does your garden fare?

And the September update . Look for more monthly updates in the black header bar under Garden Updates.